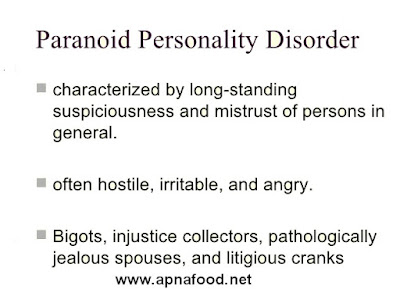 What Is Paranoid Personality Disorder?
Definition:
Paranoid personality disorder (PPD) is a mental disorder characterized by paranoia. An individual with paranoid personality behavior is very suspicious of others. They mistrust the motives of others and believe that others want to harm them. PPD usually appears in early adulthood. PPD appears to be more common in males than females.


According To DSM 5
“Paranoid personality disorder (PPD) Is a pattern of distrust and suspiciousness such that others’ motives are interpreted as malevolent.”

What Are the Symptoms of Paranoid Personality Disorder?
Suspicion
Concern with hidden motives
Expects to be exploited by others
Inability to collaborate
Social isolation
Poor self image
Detachment
Hostility

What Are the Causes of Paranoid Personality Disorder?
It appears to be more common in families with psychotic disorders such as schizophrenia and delusional disorder, which suggests that genes may be involved. Paranoid personality disorder can result from negative childhood experiences fostered by a threatening domestic atmosphere. It is prompted by extreme and unfounded parental rage and/or condescending parental influence that cultivate profound child insecurities.

How Is Paranoid Personality Disorder Diagnosed?
Diagnostic criteria:
The mental health professional will perform a comprehensive assessment. They may ask about your childhood, school, work, and relationships. They may also ask you how you would respond to an imagined situation. This is to gauge how you react to certain situations.
How Is Paranoid Personality Disorder Treated?
Medications
Medications for paranoid personality disorder are generally not encouraged. An anti-anxiety agent, such as diazepam, is appropriate to prescribe if the client suffers from severe anxiety or agitation where it begins to interfere with normal, daily functioning.
An anti-psychotic medication, such as thioridazine or haloperidol, may be appropriate if a patient decompensates into severe agitation or delusional thinking which may result in self-harm or harm to others. Medications prescribed for precise conditions should be used for the briefest interval possible to successfully control them.

Psychotherapies
Psychotherapy is the most promising method of treatment for Paranoid Personality Disorder. People afflicted with this disorder have deep foundational problems that necessitate intense therapy. A confident therapist-client relationship offers the most benefit to people with the disorder, yet is extremely difficult to establish due to the dramatic skepticism of patients with this condition. People with paranoid personality disorder rarely initiate treatment and often terminate it prematurely. Likewise, building therapist-client trust requires care and is complicated to maintain even after a confidence level has been founded.

Risk and prognostic factors:
Genetic and physiological;
There is some evidence for an increased prevalence of  Paranoid personality disorder in relatives of probands with schizophrenia and for a more specific familial relationship with delusional disorder.
Posted by Apna food
Labels: Clinical Psychology, Psychological disorders, Psychology, psychology articles