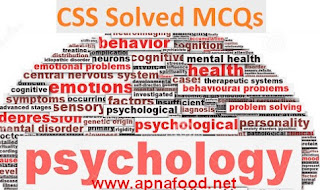 1) Tests that employ real life problems that the examinee is likely to face on the job are called:
a) Job tasks
b) Valid tests
c) Situational tests
d) Projective techniques

2) Motor skills are largely a result of:
a) Learning
b) Maturational process
c) Practice
d) Observing other

3) In Piaget’s theory, the first two years of life are called the ----- stages:
a) Paralinguistic
b) Exploratory
c) Sensorimotor
d) Preoperational

4) Learning theories explain attachment of infants to their parents in items of:
a) Conditioning
b) Observational learning
c) The maturation of perceptual skills
d) Cognitive development

5) Freud was among the first to suggest that abnormal behavior:
a) Can have a hereditary basis
b) Is not the result of demonic possession
c) Is psychology caused
d) Can result from biological factors

6) Which of the following is not a common symptom of the depression?
a) Insomnia
b) Delusions
c) Poor appetite
d) Lethargy

9) The concept of intelligence is closely related to:
a) Motivation
b) Learning
c) Perception
d) Cognition

11) Addictive disorders include:
a) Alcoholism and drug addiction
b) Overeating
c) Sociopathalogy
d) All the above

12) Seizures, confusions, delusions and hallucinations are symptoms of :
a) Advanced alcoholism
b) Delirium tremens
c) Alcoholic withdrawal
d) All of the above

13) The central concept in Gestalt therapy is:
a) Awareness
b) Self-fulfillment
c) Self-control
d) Desensitization

14) The techniques used in behavior modification:
a) Stress interpersonal interactions
b) Employ the principal of learning
c) Are capable to a very limited rang of psychological problems
d) All involve some sort of operant conditioning

15) Research has suggested that compulsive behavior persists because:
a) It reduces anxiety
b) There is some underlying conflict
c) Others begin to expect it
d) It diverts the attention of the individual from the problem

16) A perceptual experience, which is not grounded in reality, is called a/an:
a) Delusion
b) Illusionary images
c) Hallucinations
d) Spontaneous discharge of sensory neurons

17) The hallucinations of schizophrenic are most likely to be:
a) Auditory
b) Visual
c) Tactual
d) Olfactory

18) Among people with severe mood disorder, ------- is most common:
a) Mania
b) Depression
c) Manic-depression
d) Euphoria

19) Rogers believes that all of us are born with:
a) Unconditional positive regard
b) A drive for self fulfillment
c) A sense of individuality and uniqueness
d) A variety of incongruence, which must be resolved in infancy and early childhood

20) Developmental psychologists believe that two factors that influence human development are:
a) Motivation and emotion
b) Self and others
c) Genetic make up and experience
d) Rewards and punishments