Menu
Home » Neurosis » Psychological disorders » Psychology » What Is Neurosis? What Causes And Symptoms Of Neurosis?

What Is Neurosis? What Causes And Symptoms Of Neurosis?

What Is Neurosis? What Causes And Symptoms Of Neurosis?

Neurosis may also be called psychoneurosis or neurotic disorder. Neurosis is a class of functional mental disorders involving distress but neither delusions nor hallucinations. 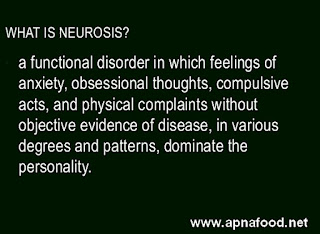 Neuroticism is a long-term tendency to be in a negative emotional state. People with neuroticism tend to have more depressed moods. Neurotic people suffer from feelings of guilt, envy, anger and anxiety, more frequently and more severely than other individuals. Neuroticism is the state of being neurotic.

History Of Neurosis!
The term neurosis was coined by the Scottish doctor William Cullen in 1769 to refer to "disorders of sense and motion" caused by a "general affection of the nervous system." Cullen used the term to describe various nervous disorders and symptoms that could not be explained physiologically. The meaning of the term was redefined by Carl Jung and Sigmund Freud over the early and middle 20th century. It has continued to be used in psychology and philosophy.